I know this isn’t my birthday, so how can it be a new adventure?

Let me explain my ways…

It’s the birthday that started this whole blog madness.

It’s the impending one that a certain someone is having a hard time with.

It’s the reason I started my 40 adventures before 40 and the inspiration for me writing (aka rambling and so expertly entertaining all of you).

And I’ve never had a husband who turned 40 before.

Plus I hosted the party, so it counts right?

We rented the banquet room at the Angel Of The Winds Casino. I always host parties at our house, so having a catered party where the head count had to be accurate was stressful. I think it’s payback for how terrible I am at RSVPing.

I just wanted everything to be perfect. I mean, he’s kind of a big deal. I even embarrassed him a few times. You can’t have a milestone birthday without a little embarrassment. The pictures from the last 4 decades that were placed on the tables were a great conversation starter…

This was definitely a favorite.

I think the party was a success. 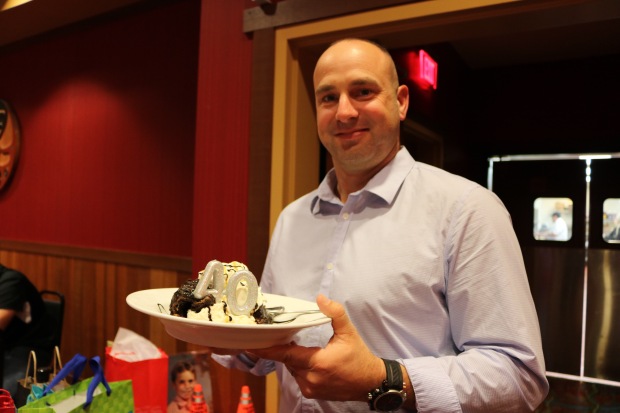 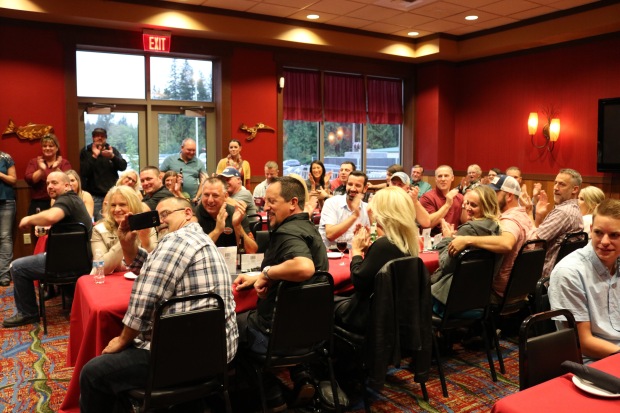 And by writing about his birthday, I get to write about him.

The man who is my rock. My life partner. My best friend. My biggest supporter. My parenting teammate. My motivator. My inspiration.

The love of my life.

He’s also my third child. I mean he leaves things everywhere. He can win a “have you seen my…” competition with the best of the toddlers and teenagers. He claims I move things (this is true…I have been guilty of this), but most of the time it’s right where he left it…on the floor, on a counter, on the couch, outside. Pretty much anywhere, but it’s proper location.

As a read this to him, he said “That’s your opinion…not fact.” HA!

This is the man who stuck by me. He didn’t have to. We hadn’t been dating long before I was pregnant with Emilee. We had to grow up fast. Not a lot of 21 year olds would stick around. I was an awful pregnant person…worried about everything. I was scared, but I was mostly ridiculous. I wasn’t a great girlfriend either…I was so focused on my pregnancy. I mean it’s understandable, but still it was hard to balance a fairly new relationship.

We’d known each other for years. Since middle school (at the same middle school where I teach actually). But we never dated in school. In 1997, we bumped into one another at a social gathering. We’ve been together ever since.

He supported our family financially and emotionally while I went to school to become a teacher. He put his own passions and desires aside and worked long, hard hours in construction to pay the bills. We struggled. We lived in a travel trailer, apartments, and an old duplex. I graduated school. Jaxon was born. I didn’t even have my first teaching job yet, but he bought us our first home.

He’s a devoted son, father, friend and brother. He’s a family man. He definitely gets grumpy when he’s hungry. He wears his feelings where everyone can see them…whether it’s happy or frustrated. He expects a lot out of people and is disappointed often because not everyone is as passionate or driven.

He’s attended almost every soccer, baseball, and basketball game. Every track or cross country meet. He’s coached and umpired and volunteered when needed. He’s not a fan of schools or crowds of children, but he makes it to all the events (for the kids and me).

He sold his quad and his motorcycle because I thought we could save the money. To be fair…we’d probably still be in the travel trailer if it weren’t for my clearance shopping, coupon clipping, no fun having, spontaneous purchase kaboshing and overall cheap ways.

I mean, back in the day. Now I waste money like the best of them. Shoes. I love shoes.

Okay…I’m losing track of my point.

My husband offered to marry me as soon as I was pregnant with Emilee. But I shook my head no. I didn’t want us to marry simply because we were having a baby. I know that seems non-traditional. But let’s be honest, nothing about us was traditional. We waited. We married because we loved one another, not because we made a baby. That wouldn’t have been fair to either of us. Or to Emilee. Besides, she was an adorable flower girl. 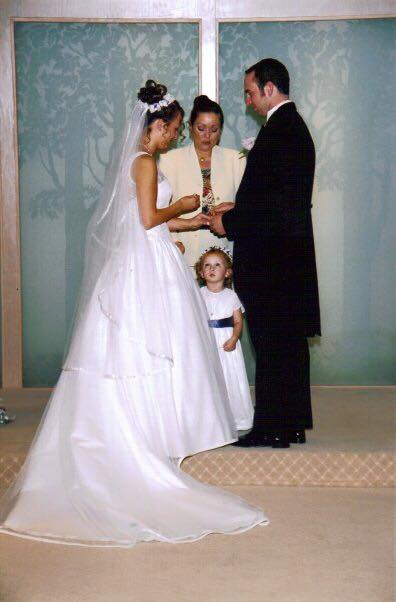 I’m a product of divorce. People thought this somehow defined me. It did not. In fact, I’m so thankful that my parents went their separate ways. I would be far more screwed up had they stayed together and remained miserable. Marriage is work, but both sides need to be committed and able to compromise. It takes a lot of maturity to put someone else ahead of yourself. Many of us in our 20’s struggle with our ego-centric selves. Much more so for my parents who started dating when my mom was 14. Sometimes it works out. Sometimes it doesn’t. But being a product of divorce does not define a person.

To all those that doubted us: we win.

To those of you who’ve been through divorce as a kid or an adult: Divorce is an experience that is part of your story, but it does not define you.

We choose the path in which we want to travel.

Don’t wait. There are no guarantees. Life is a powerful thing, but it’s fragile. Don’t waste it fretting over a number that may signify an age. It’s only a number. Instead embrace it. For you likely have much to be proud of as the years fly by. Count your years in successes and failures. The obstacles you’ve overcome. The miracles you’ve witnessed. The memories and moments that you’ve shared with others.

Most of all love one another and take no time for granted.

It’s a good number. It’s nice and even. Our kids both have 4’s in their birthdays (the 14th and the 24th). It simply has good number vibes.

Some 40 facts from a fun article I found:

I mean 40 is a pretty cool number. Here’s the article:

This Is 40: Bizarre Factoids About the Number 40 You Never Knew

To Beau: You should be proud of you. You are such a hardworking, loyal, good man. You have a wonderful sense of humor. You are liked and loved by everyone who knows you. The  packed house last night was evidence of that. People are drawn to you. You bring out happiness and you keep us laughing.

I myself can’t wait to share more decades with you.