There are so many things you can do when you turn 18. For example, you can:

And get a tattoo.

After I turned 18 and when my best friend visited me at college one weekend, we drove into Spokane and found ourselves a local tattoo shop. I flipped through the pages in a tattoo book fairly randomly and chose my permanent announcement that I was most definitely 18 and could do whatever I wanted.

She had a more logical and meaningful approach. Her first tattoo came from the frog design that she had found while on a family trip. She chose her right shoulder.

I also chose a frog…not sure why, but that apparently began my love for frogs. Not the real ones. Those are kind of ewww. Just froggy designs and froggy pictures and froggy stuffed animals. It’s really weird how that all evolved.

I also chose my shoulder, but my left one so that for sure the world would know that I have an original thought of my own.

Oh how reflecting on those days brings me many smiles of that carefree life. And a few cringes at some of my choices.

And those memories with Tanya. Those definitely bring a smile to my face. Even though I was a brat. And not the greatest friend. You know, all self-absorbed and such. My husband is currently on the other side of the couch mumbling, “not much has changed”. Ha. Now who’s the brat?!?!

I don’t have any regrets. No. That’s a waste of time. It’s all been part of my life adventures. Part of the journey to who I am today. And I’m proud of that person.

So when my mom turned 60 and said to me, “I want a tattoo”. I jumped on that wagon. To her it would be an expression of her pain and loss. It would be something meaningful to honor her late mom and brother. I dig that. And of course, it was adventurous, so I was most definitely down.

It took us several months to get it planned and figured out and then on Mother’s Day we ventured out to check out some recommended places. My daughter joined us as well. At the last minute, after I jokingly asked her if she wanted one too. Well played, mom, well played. But it’s fine. She’s 18. She could do this all by herself as I did, but she was choosing to go with us.

As we walked into each shop in search of the right vibe, we got a little bit closer to turning our ideas into our reality.

Then we found a little shop called Anvil Tattoo in Marysville. And a cool kid (I say kid because I walk in with the current almost 40 something mom vibe). His name was Kyle. I mean could it literally be any more meant to be. My mom was down so we scheduled an appointment for the following week.

And then it was for real and I had to figure out what the heck I was going to permanently mark my body with.

I began pinning to my tattoo Pinterest board. I originally liked birds, but my teenage daughter informed me that was too basic. So I leaned towards something science related. I love the moon and all things space. You know space conferences and wanting to be an astronaut and all that. I mean, duh. But I couldn’t settle on a design. I also found a cool atom design that looked like a compass. But then I thought it was too much. I wanted to go simple. So I decided on a small compass. Which was no where near where I started. The struggle…

Then the question remained, where do I want to put this artwork? I have had a tattoo for nearly 22 years that I can’t see. I wanted this one to be something that would stare me in the face. Whether I loved or hated it, I wanted to see it in all it’s glory.

Then the day before, I asked my husband a question and his answer resulted in me frantically going back to my original idea.

I really didn’t make my final decision until that afternoon. I mean it is kind of a big deal.

So we rolled into our appointment and Kyle checked out our ideas and then went in the back room and drew up our designs.

Can I just say that I really don’t get how people can do that. I can’t freehand draw a smiley face. Okay, I’m exaggerating. I draw a mean smiley face. But the artistic abilities end there.

I admire those with that kind of talent.

I did however make him redraw my design. Because I’m a nerd. And I need my moons to be scientifically correct. I mean seriously. I can’t be having artsy moons. I need accurately shaped sciency moons. Even if sciency is not a word.

He wasn’t too mad at me. He was very accommodating to my nerdy, needy ways. Plus it is technically going to be permanently etched into MY skin. So there’s that.

It didn’t really hurt. I mean it sort of felt like a small needle slicing and stabbing my skin repeatedly. No big deal. 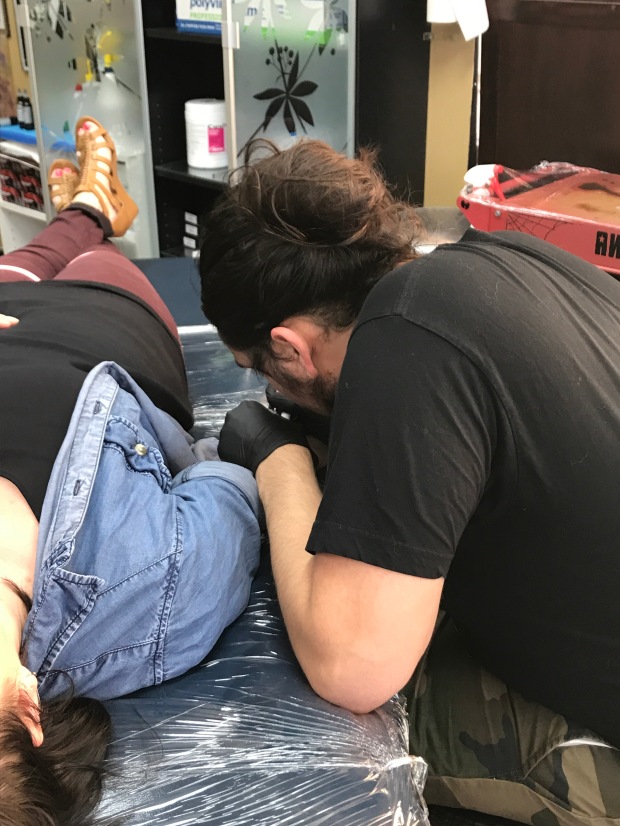 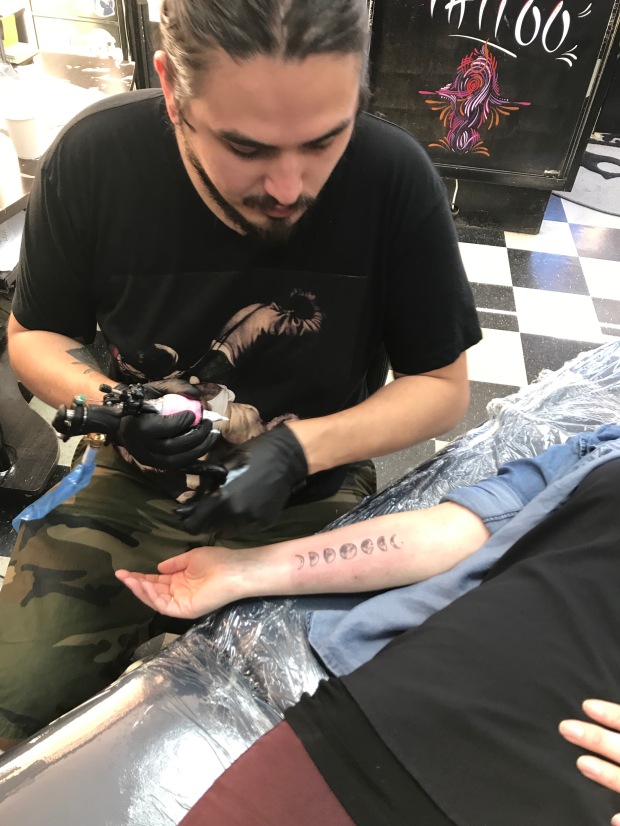 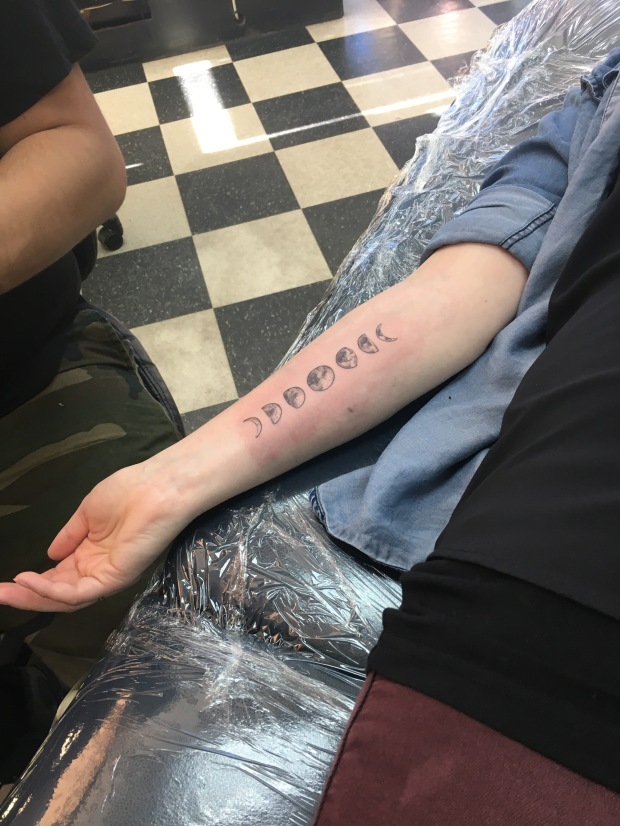 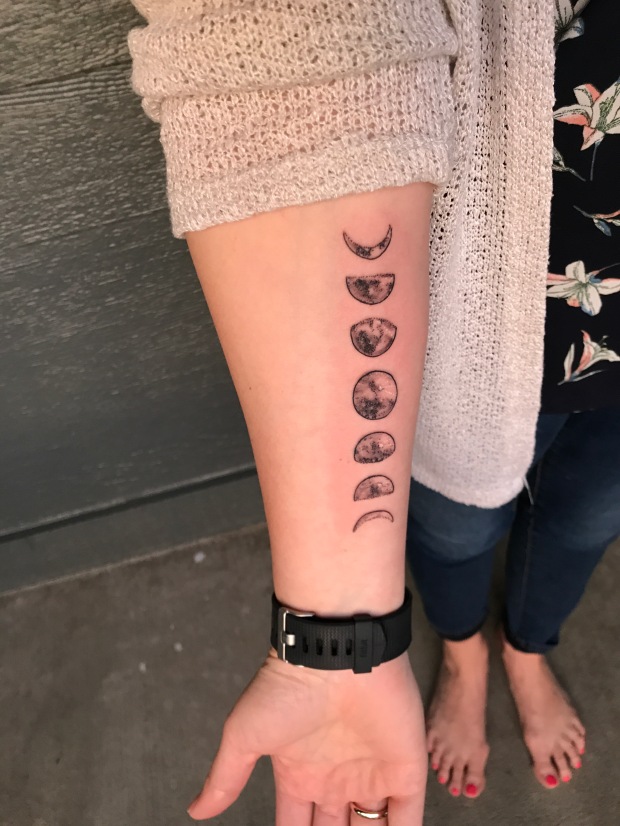 I love it. It’s perfect. And it suits me don’t you think?

After mine was done, it was Emilee’s turn. I seriously think that kid has the highest pain tolerance. “It didn’t even hurt at all.” She said. “I don’t feel anything.” She said. “Mine’s not even red.” She said. Brat. 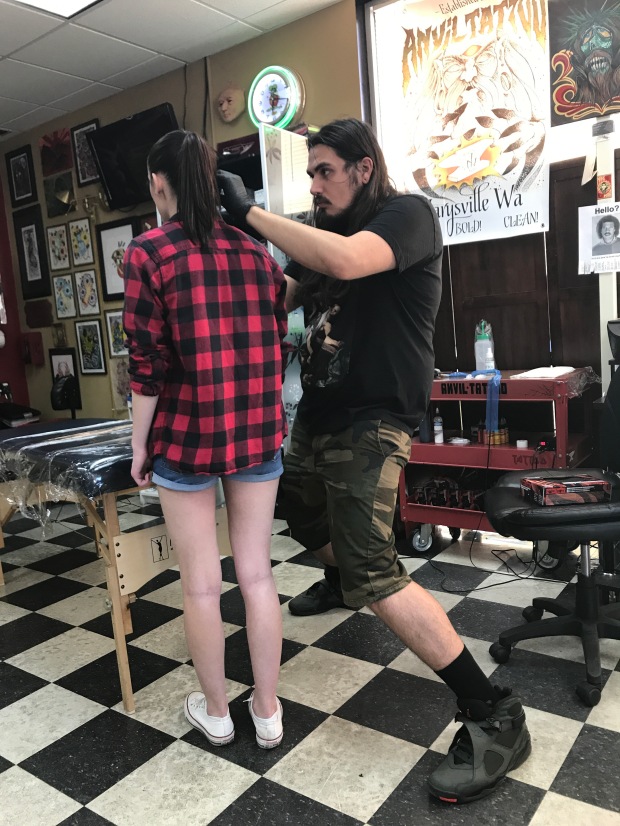 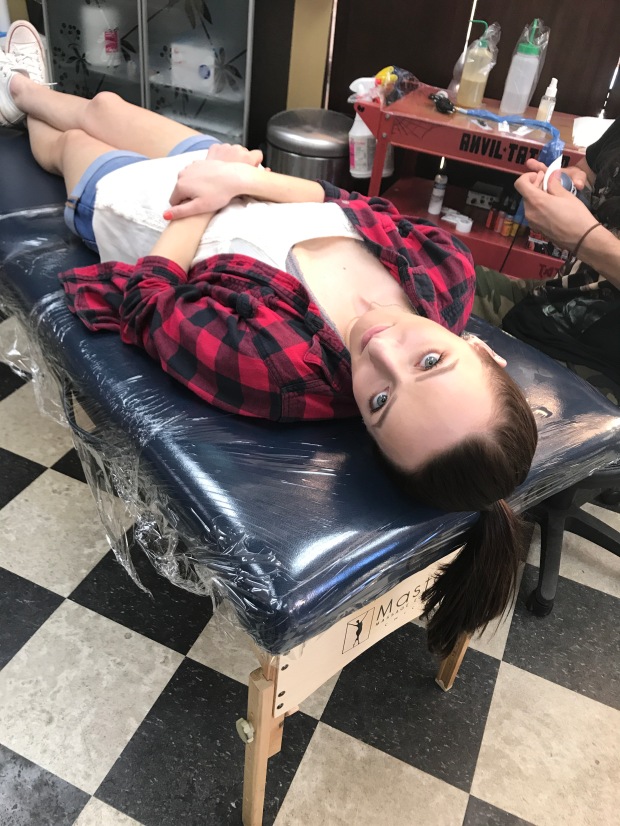 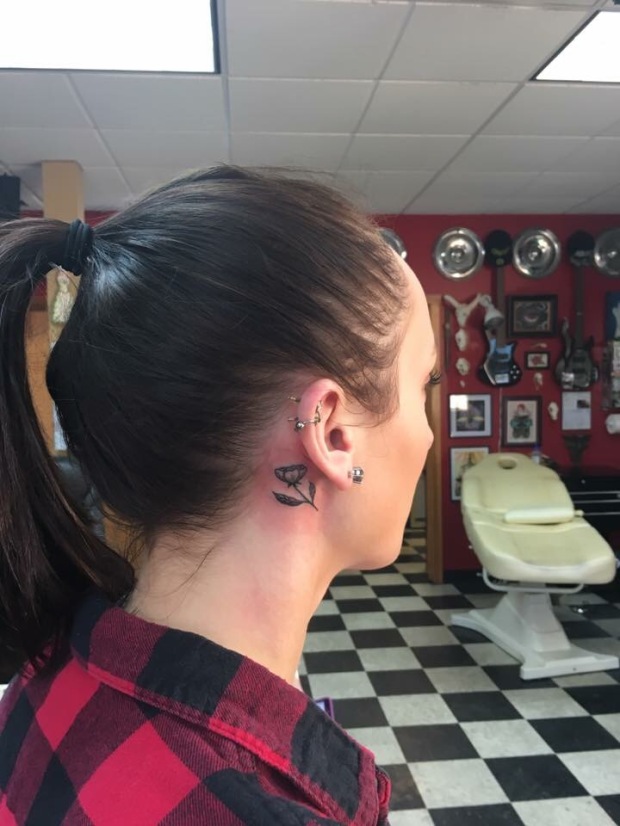 It’s such a cute design. I love her choice. It’s totally her.

Then it was time for my mom. And her beautiful tribute to her mom and brother who both passed away after long battles with cancer.

She said, ” I should just tattoo ‘cancer sucks’ under it”. I like it better without the words. Even though they are absolutely true. Cancer does suck.

When she started, there was a moment when I said, “You ready? All for your mom and your brother.” And it was kind of an emotional moment. She just smiled and nodded and looked reflective. Makes me tear up as a write this. How hard it must have been to lose her mother at 19. You can read that story here. 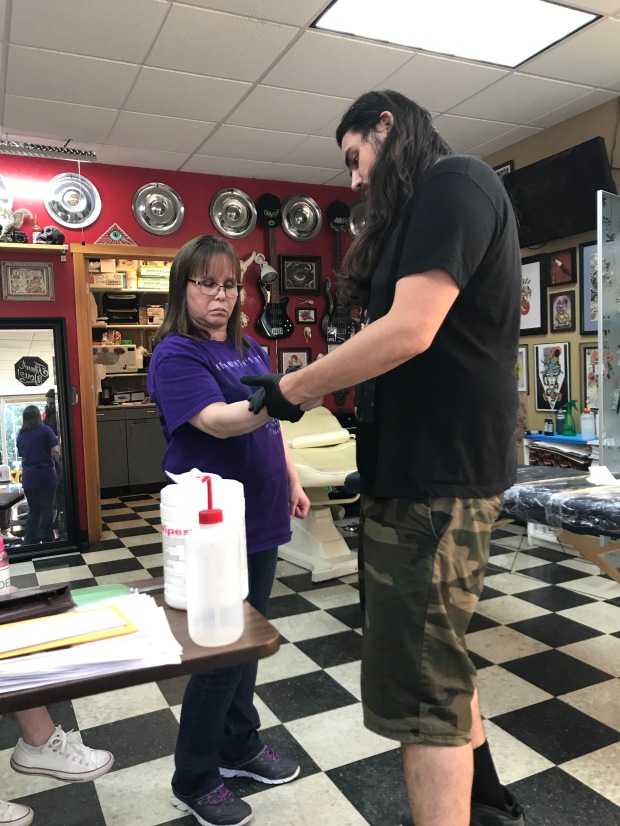 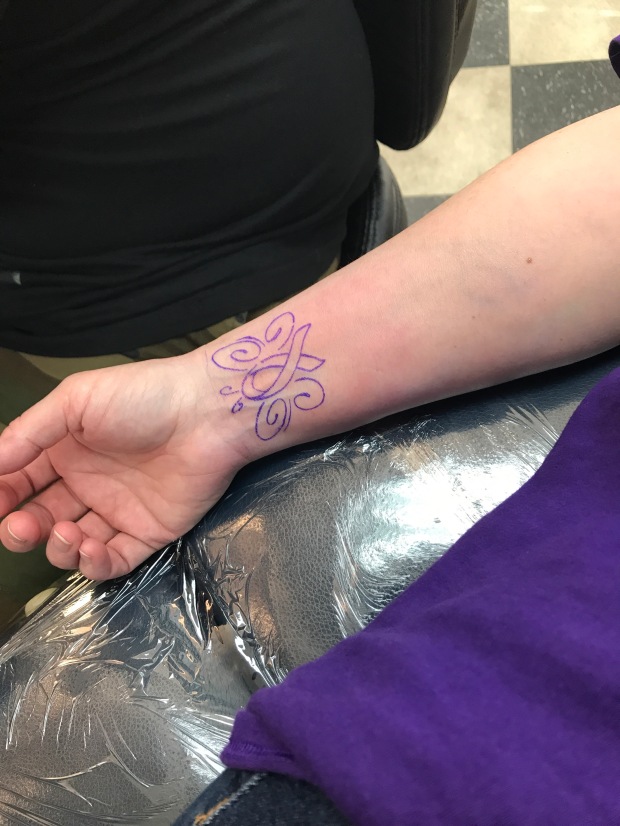 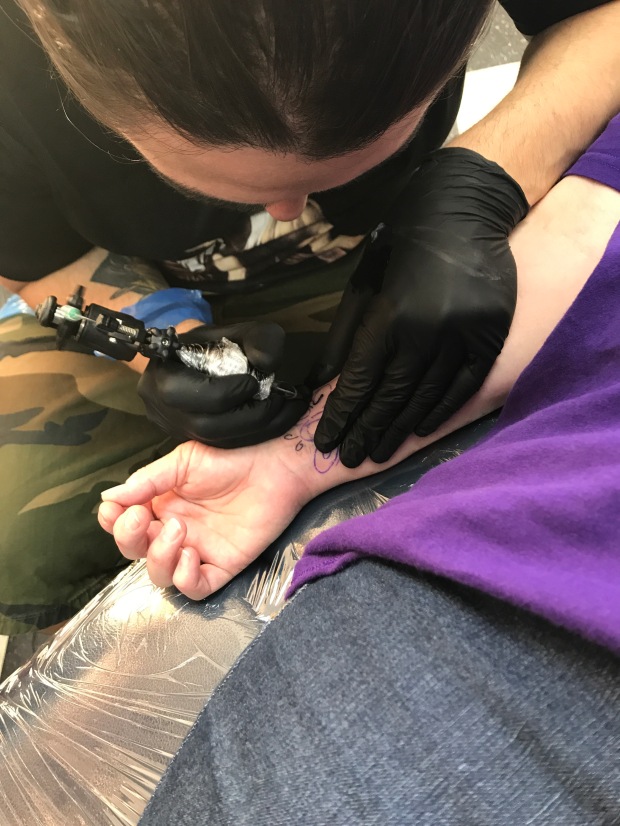 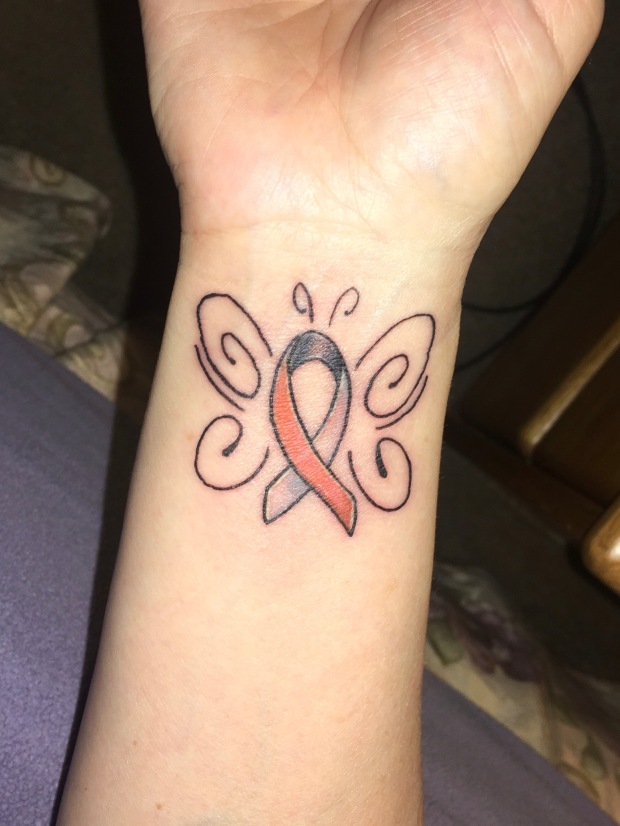 And here I am. Sharing another amazing moment with my own mother. I’ve had so many to share with her and I’m ever so grateful.

And add to that my daughter could share in this moment too. It’s a pretty damn awesome thing. 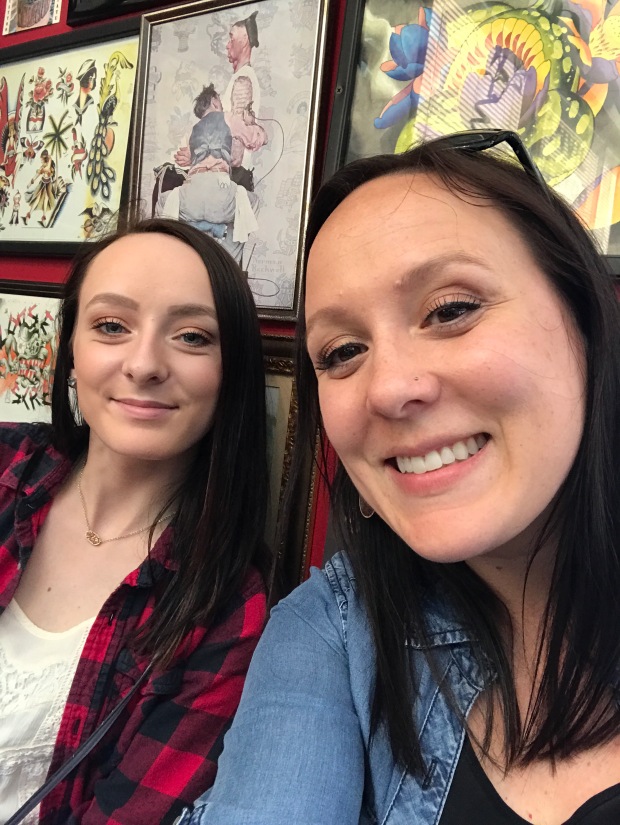 Wait…
Three generations of women on an epic inked up adventure.