So we’ve been gathering Alaska Airlines miles for a few years now. You know making all our monthly purchases on the credit card and then paying it off at the end of each month.

It’s been eye-opening, let me tell you. If you want to know exactly how much money you spend, you should go with this method.

And since my blogging business (jk…it’s not a business). I don’t think there’s a market for random blabbing, but if you’re still reading: thank you 😘

Anyway, since my blogging isn’t making me money to pay for my travels, it’s the airline miles that’ll have to do.

We were able to book roundtrip tickets to San Francisco for the fam for only 40,000 miles total. I mean who cares that we literally had to spend $40,000 to earn these miles…let’s just ignore that part!

I shall highlight our favorite parts of this family travel adventure:

We haven’t taken a family trip since our 2014 trip to Hawaii. That was with a lot of extended family too, which makes it way more entertaining. But this was special too. Just the four of us crammed into one hotel room sharing two queen beds. I don’t know that everyone was a fan, what with the snoring and coughing (spring break cold and all) and the all sharing one bathroom part. And it’s not like the kids are little anymore…we are all (almost) adultish. But it was cool for me. We often get caught up in our own stuff whether it’s reading our own book, watching our own tv show, participating in our own sport or activity or hanging with our own friends. And then so much time goes by before we realized we haven’t had a family dinner or conversation, so for me the four of us being crammed into this little room was perfect. And a reminder of the so very short amount of time left with all four of us living together in one house.

We stayed at Hotel Adagio and picking a hotel in a city you’ve never been is stressful. I spent hours researching and reading reviews before making the reservation. Then I spent hours rethinking my decision. Ugh. The struggle is real. Fortunately, the research pays off because we always luck out and our stay was awesome. This hotel was in the Union Square part of downtown. And from the moment we walked in, we were treated amazing. From the breakfast vouchers for a most delicious breakfast every morning, to the complimentary umbrellas (yes…we picked a rainy travel destination from rainy Seattle to rainy San Francisco). On top of all the great service, the manager (Chris) also put us in one of the “balcony” rooms. There were only three of them in the entire hotel. Balcony is in quotations because I don’t believe you are actually supposed to crawl out there. You literally have to climb through a window and it was all sorts of scary. But it did make for great photo opportunities…then I made them crawl right back in before I had a heart attack. 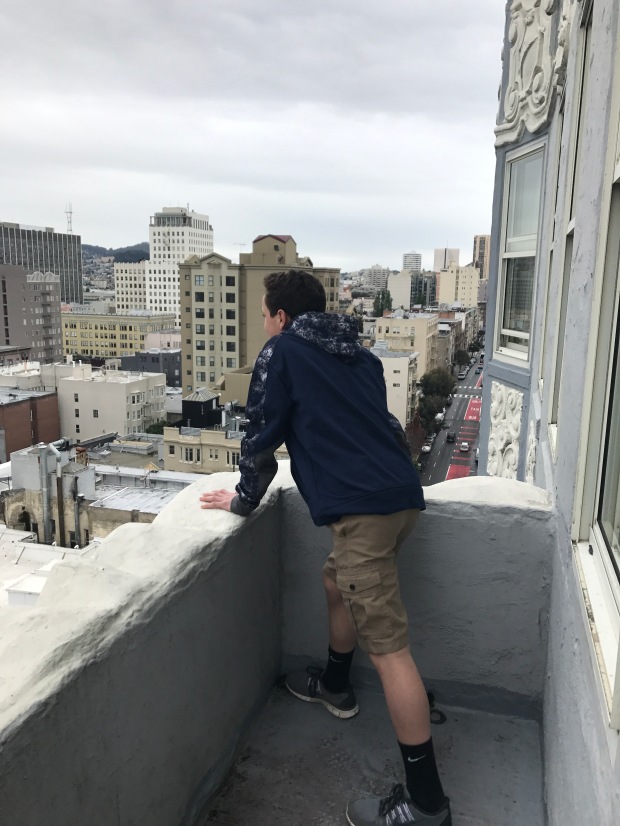 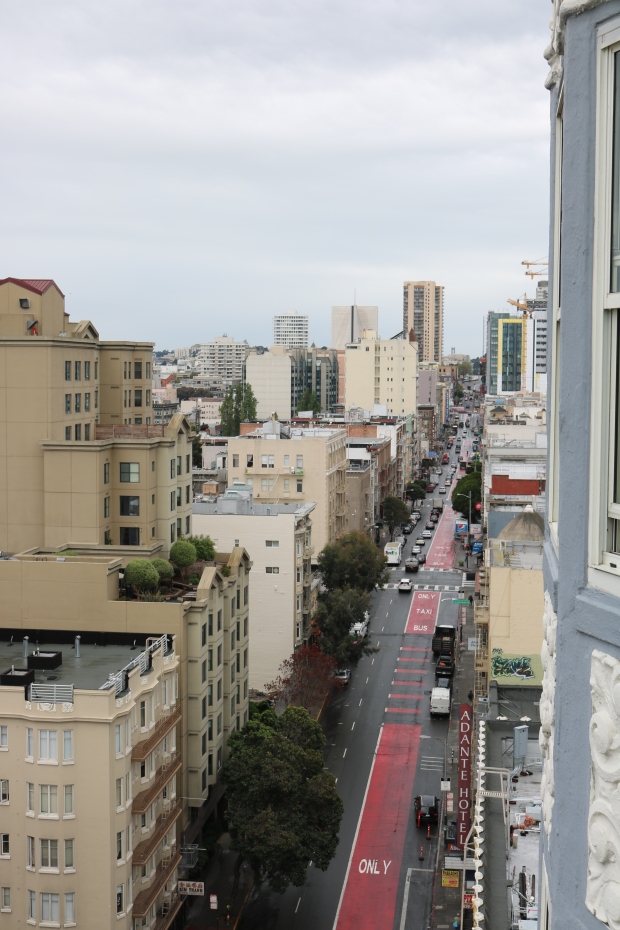 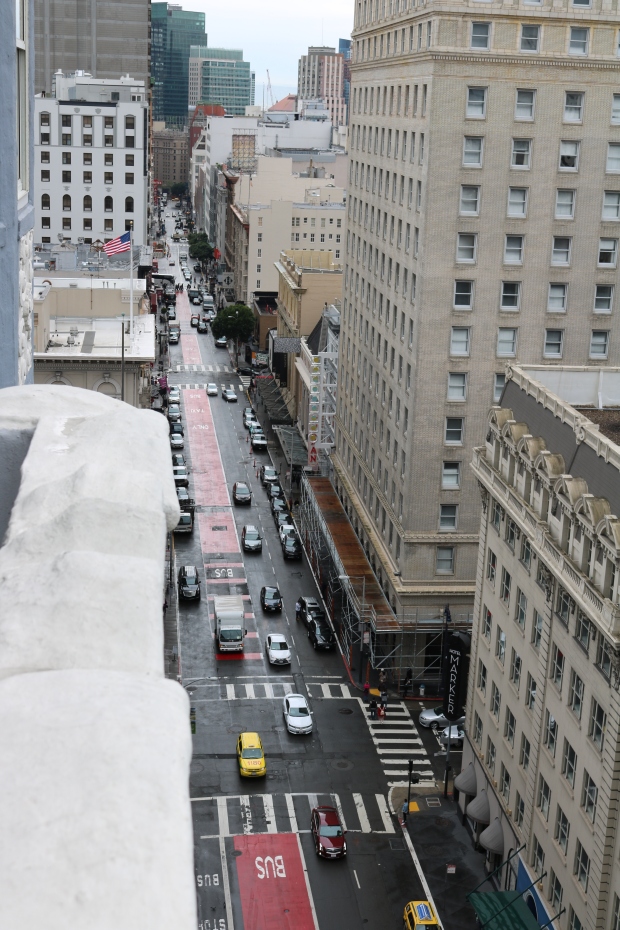 We rode a cable car to the wharf and Pier 39 on our first day. The line for the cable car was ridiculous but when you are playing tourist, you’ve just got to do it. The first day was stormy, but we got a break in the clouds and were seriously entertained by the sea lions. They are so funny…we laughed at their oddness and remarked how Finding Dory really nailed it. We also ate clam chowder bowls (well except for Jaxon…he just ordered the bread part of the bread bowl and the waitress maybe thought he was crazy). Picky eaters. And then we explored the shops before heading back to the hotel. Oh and we also went back to the wharf two more times on our trip… 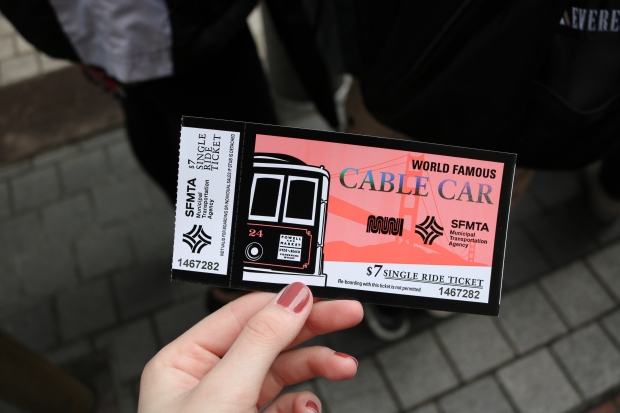 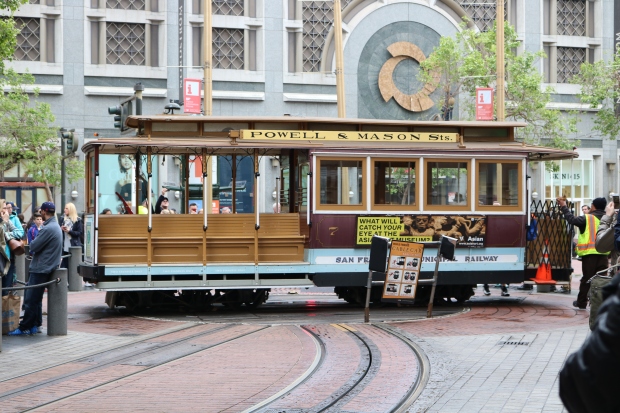 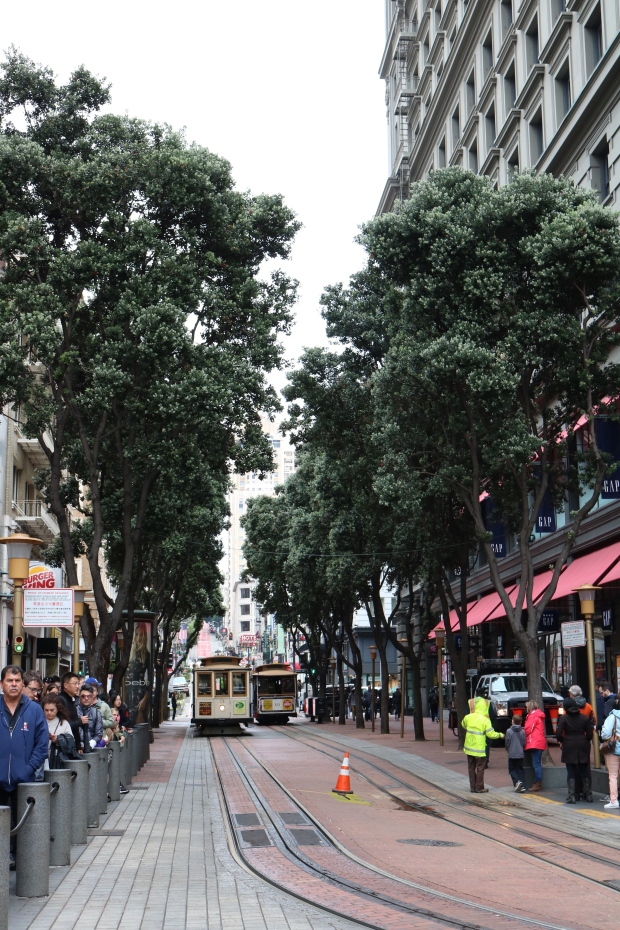 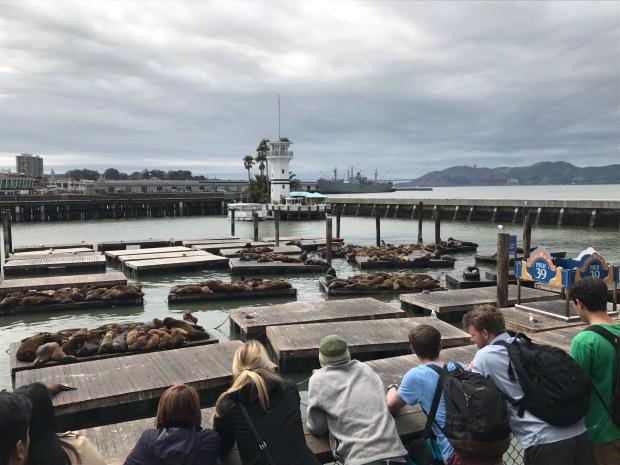 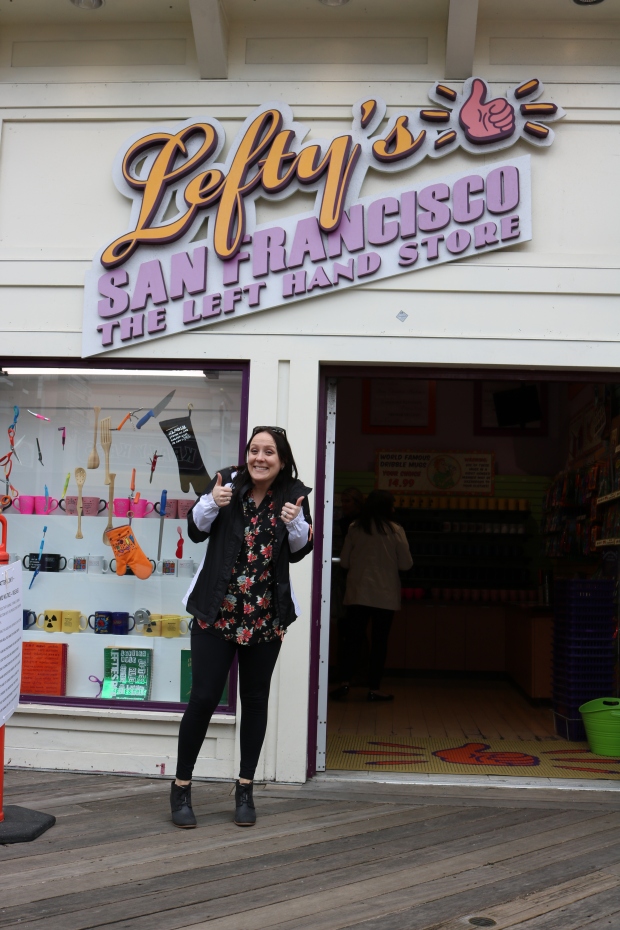 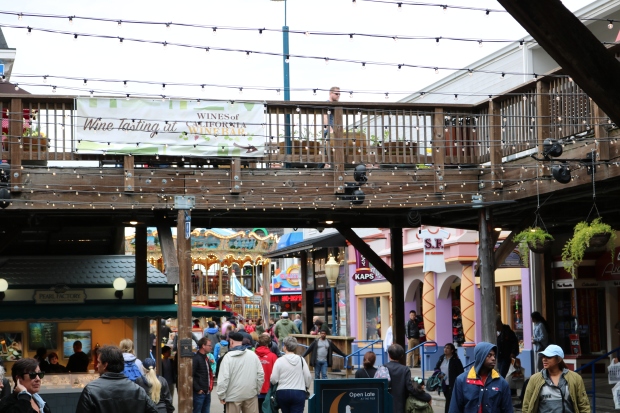 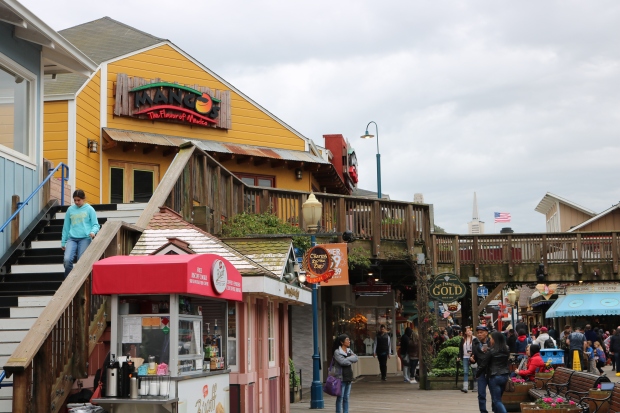 On day two (which was to be another rainy day) we rented a car and took a mini road trip. We ventured over the Golden Gate Bridge and I absolutely love this part about experiencing new places. We read about places and watch them on tv, but I mean the first time you see it in person, it something else entirely. I just try to soak it in and I’m always in awe of the beauty in engineering such structures. After my special moment with the bridge we continued in a big loop through Sonoma Wine Country and back around south through Napa Valley. Since it was so rainy, we only stopped at one winery, but it was a pretty cool one. Castello di Amorosa was quite the spectacle. To live in a time of real castles in all their glory would have been something else. Also probably really smelly, but whatevs. I can’t wait to one day visit England and Scotland and check out those real castles. 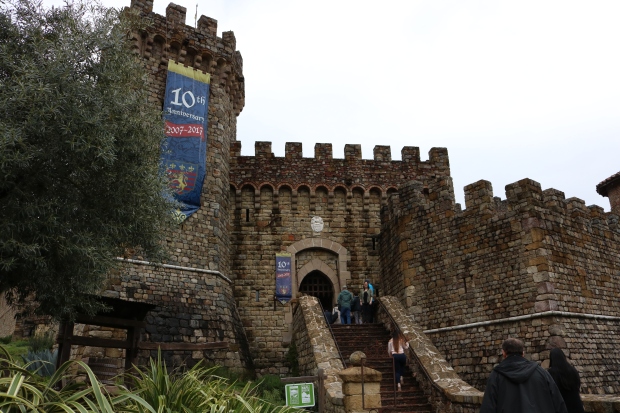 Our Favorite Place To Eat

This probably seems odd, but food is important and when you find a good place to eat on vacation, you ought to write about it. This place for us was the Honey Honey Cafe and Crepery. I think the name and outside make it sound like a strip club, but one should never judge a place by its name. Because this place just had darn good food (and no strippers so that was a plus). Sandwiches, wraps, savory crepes and dessert crepes. Mouth watering yumminess overload I’m telling you. We discovered the Nutella and strawberry crepes. And then we went back and ate there two more times on our trip. Notice any trends? The Kyles just might be creatures of habit. 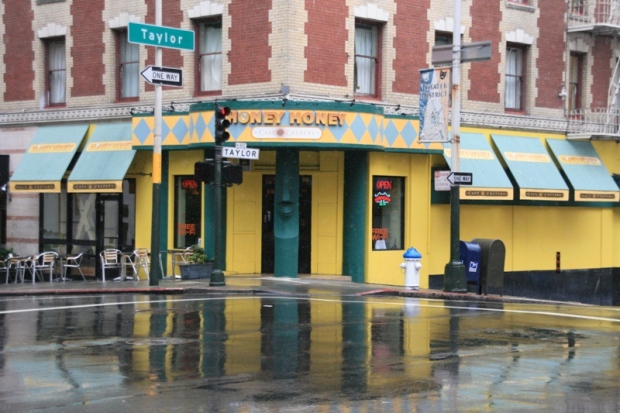 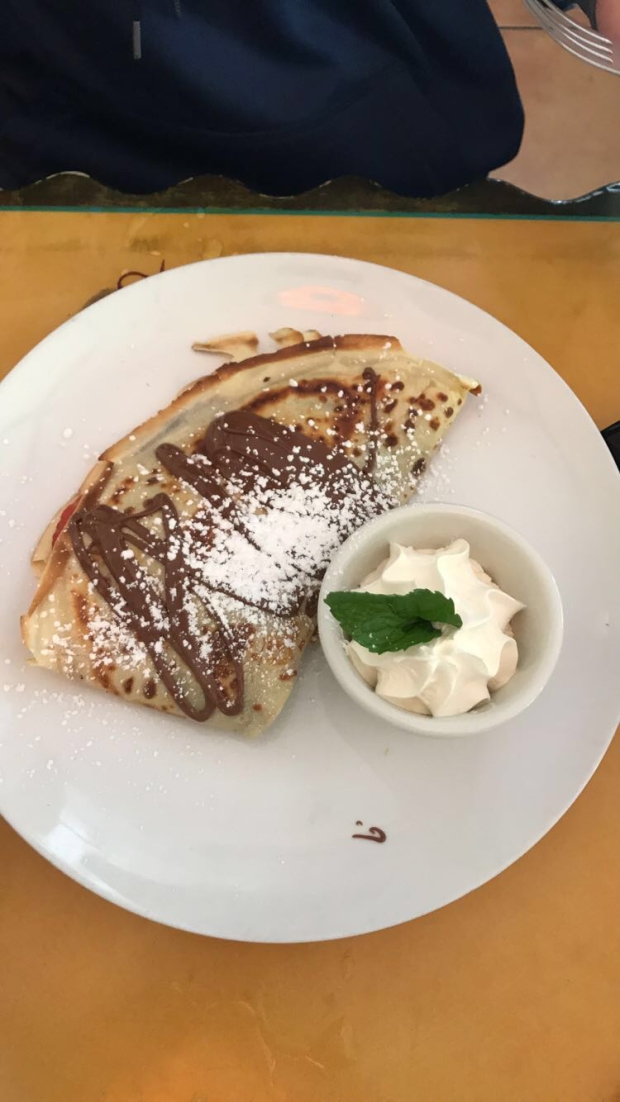 On day three we ventured back to Fisherman’s Wharf and boarded a cruise boat for a ride around the bay. It was awesome going under the Golden Gate Bridge and all the way around Alcatraz Island. The boat tour included narration so we learned the history of all the landmarks. The kids really wanted to tour Alcatraz, but I failed to secure reservations. Bad mom. 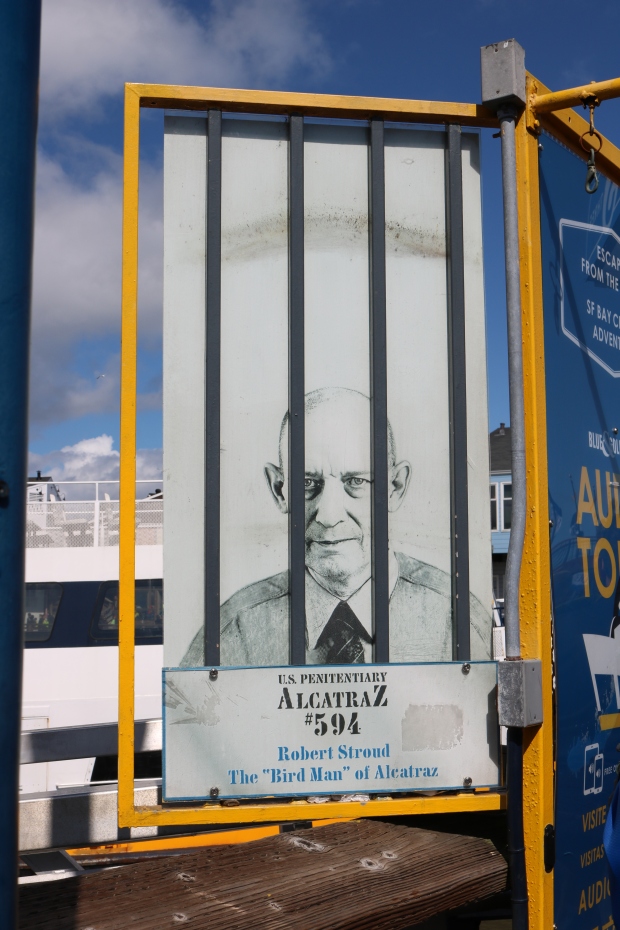 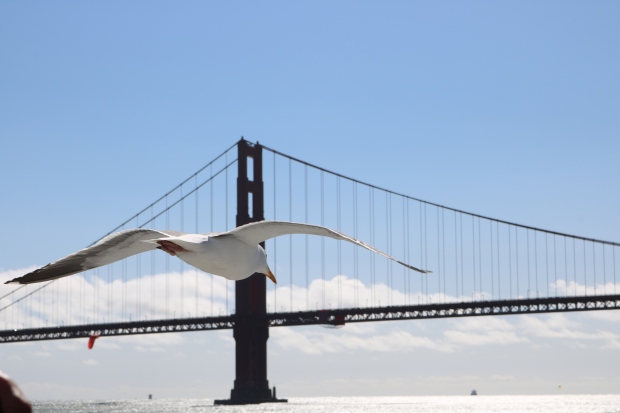 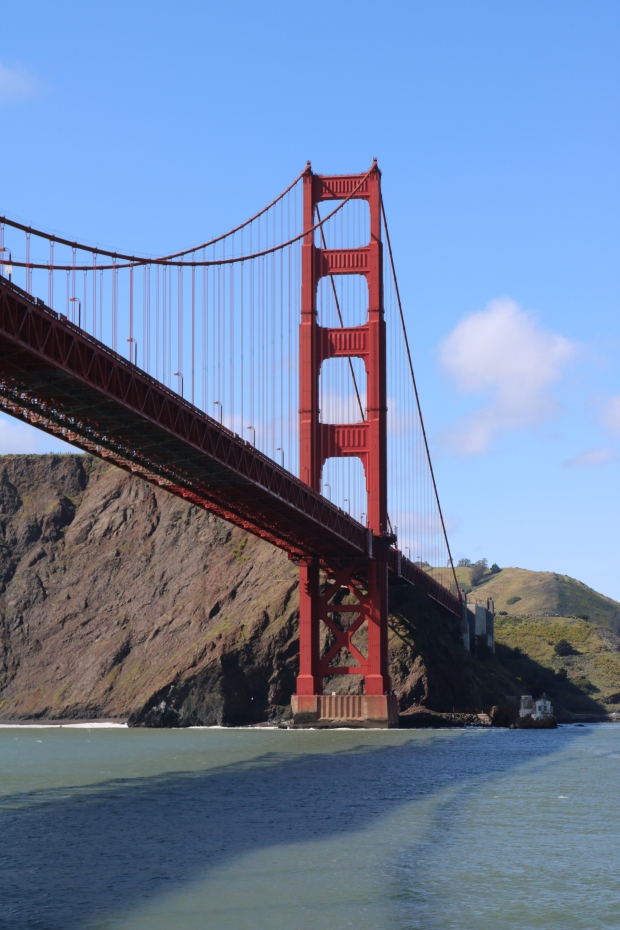 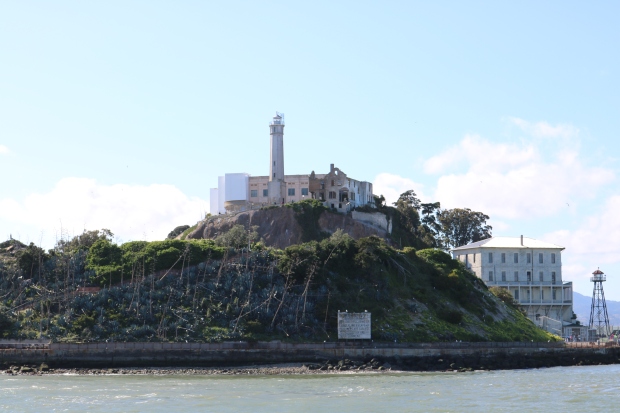 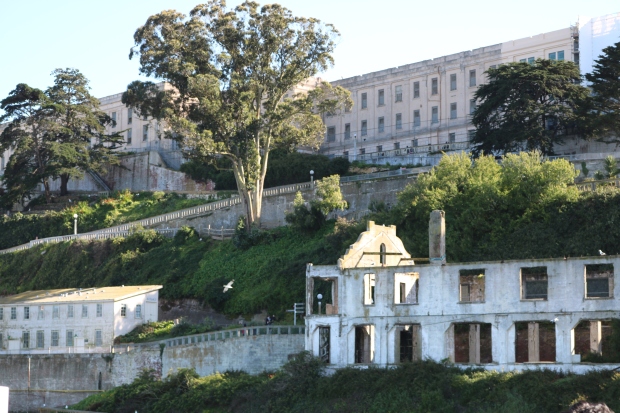 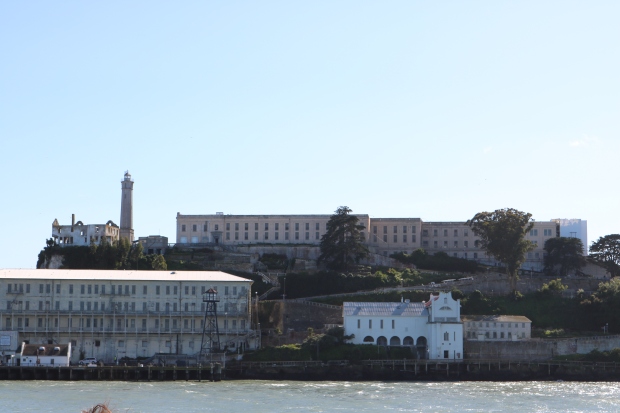 We also enjoyed Uber-ing around town and meeting all the drivers, some nice and willing to share cool places to check out and some scary and unfriendly, but hey, that’s part of the adventure I guess.

Some other quick stops included the famous Lombard Street, Chinatown, The Full House houses, and Haight-Ashbury Street (we all gained a little culture from that area…and maybe a contact high from all the marijuana). Just kidding. Totally kidding. It was quite interesting though. 😳 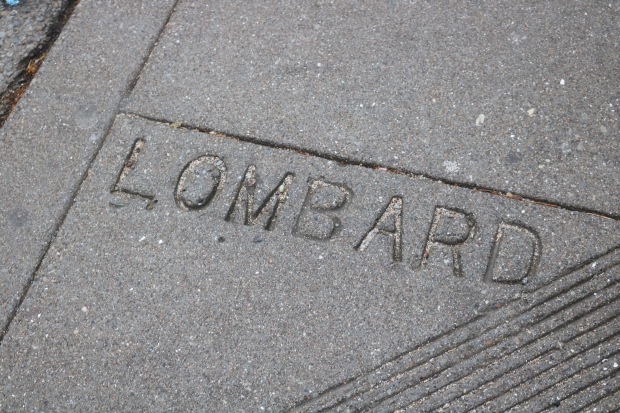 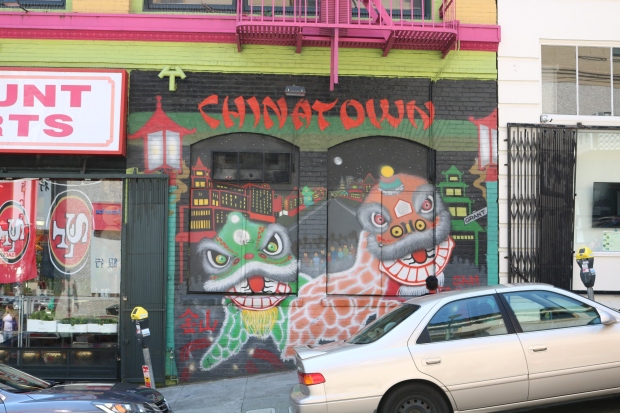 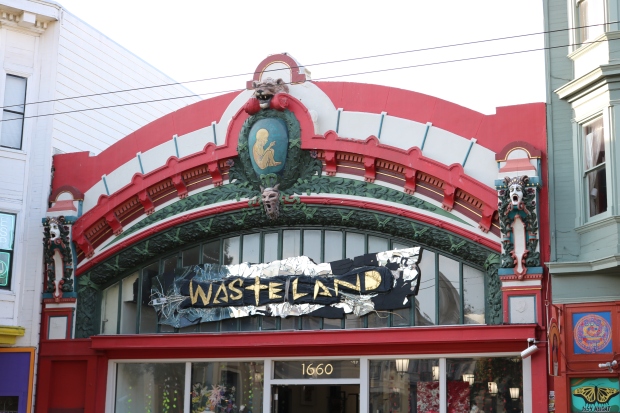 All in all, it was a great trip. San Francisco is a cool city. It’s kind of like Seattle in that people are open-minded and there’s a chill vibe. I dig that. Maybe it’s the legalization of marijuana or something. Kidding again. Well, not really, but I’ll steer clear. I’d like to keep my brain cells.

The best part though was experiencing it with my number one people.

My family. My heart. 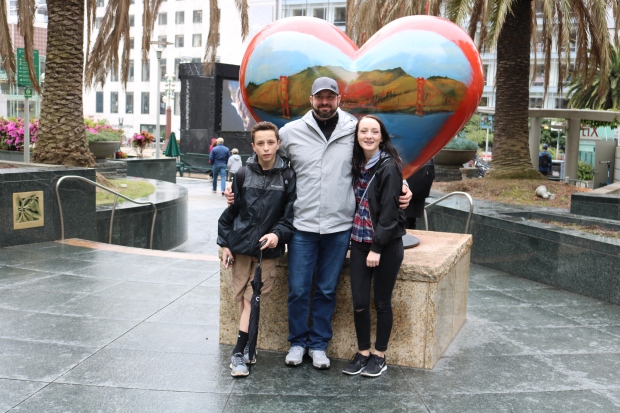